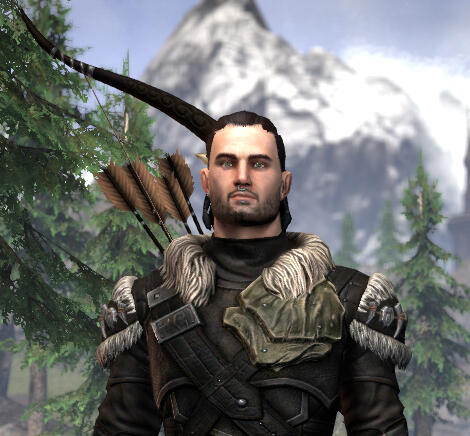 Vilkas is tall, being of Reach heritage, standing 6'4". He typically wears leathers of browns and gray with fur and bone accents. and is often accompanied by a black wolf, named Huus.

Vilkas was born into the matriarchal Ravenblood clan in the Druadach Mountains, east of High Rock, in the Western part of the Reach. The clan’s existence is semi-nomadic, traveling into the mountains passes in the short summers, and spending the winters in the lowlands, between two primary campsites, depending on hunting, weather, and food stores.

The clan was entrusted with protecting their territory by their War-Mother or Madadheachrg, the mysterious flame-haired Bloodied Raven, to who they created totems and enacted rites in her name. The people believed that ravens precede her blessing, so the birds are revered. Along with the Madadheachrg, the clan also honors their Hunt-Father Hircine, offering their prayers specifically to Hrokkibeg, their lord’s bear aspect.

The clan is governed by two who are considered sisters, even when not by blood. Vilkas’s mother is one such sister, Uaela, who still leads the clan with her sister Eiaga, although both have advanced considerably in years. It was a hard life, but he knew nothing else besides such as he grew early to be a tracker and hunter. The clan suffered losses as it does, including his younger sibling at the hands of a rival clan, during a raid. He was twelve when he killed his first man, from the raiding clan.

He grew in stature in the clan, but being a male, he would never lead, but such things never troubled him. When Vilkas was thirteen he tamed his first wolf and hunting companion. When he came of age, he took the name Dark-Wolf. At the age of 18, he was honored with the role of Hrokkibeg during the New Life Festival, challenging Storihbeg, played by his on-again, off-again rival in the clan, Odondaig.

It was at the age of 25 that his life changed when he was following the trail of what he thought was an interloper, a scout from a rival clan, he was set upon by a fierce woman. At first, he thought her a strange visage, flashing teeth, and burning eyes, then she attacked. He fought but was no match when her teeth sunk into his flesh and he met his death, only to awaken in a strange place.

It was then that he learned the truth about the hunger burning within him, and his new existence. Over 25 years have passed since that night and in that time he now understands that the Bloodied Raven isn’t the revered Madadheachrg but a vampire-like himself, although of great power in comparison. And to his sire, Kellandria Brezik, he has given his loyalty.

Over the years, he has learned other ways of the world such as reading and writing, leaving behind some of his old ways, but stubbornly clings to his roots, as he worships Hrokkibeg, and will willingly do, the Bloodied Raven, Morithabd’s bidding. He still often returns to his clan, who have accepted him as if he were a gift from the Madadheachrg.

Tracker: After years spent tracking game and protecting the land, Vilkas is a skilled tracker, able to find minute details even in difficult terrain.

Watchful/Quiet: Vilkas has a keen eye and ear, and often grows quiet and still as he takes in the surroundings. His years of tracking and hunting have given him the capacity to move swiftly and quietly.

Marksmanship/Bow: Vilkas is skilled with a bow, and even though his vampire bloodline gives him strength and capacity to fight without a weapon, he will most often take on an opponent at range.

Solskera Vampirism Strain (Sunshorn): The abilities of this bloodline are not dissimilar from many others, allowing Vilkas to appear mortal more often than not. Details on this bloodline can be found here.

Animal Training/Handling: Having befriended and trained his first wolf companion as a young adult, he has an affinity with animals, even in his vampiric state.

Hand-to-Hand/Martial: Vilkas is adept at fighting with whatever he needs to survive. Whether that is allowing his vampire nature free and attacking with teeth and claws, hand-to-hand, or whatever he can grab. While he may lack finesse without a bow, he will fight however he needs to, being a survivor at heart.

Minor Magical Ability: He has some affinity with Mysticism and Destruction magic, but that has never been a great interest to him.

Crafting: Vilkas is a boyer, and fletcher, something he enjoys doing when he can.

Other likes include fishing. He also has an interest in herbalism, which his mother taught him.

While some inhabitants of Tamriel are worldly, learned and well-traveled, Vilkas is not that person, or rather vampire. He has learned to read and write, but only begrudgingly after he was turned. His knowledge is informed by the land and his worship of the Hunt-Father, not by the written teachings of others or far off places.

He gains his strength and identity from those he perceives as family. His now vampire sire, Kellandria, Morithabd and her husband Vinnric, The Bloodraven clan, his wolves, and of late the Solskera, and their lord. For those outside that sphere of influence, it is a rare person who will hold any sway or regard in his eyes.

Vilkas is protective of those he considers family and will go to great lengths, risking his life for their safety.

He can be stubborn when set on a course that he believes is correct, whether or not that is the case.

Have a good one.